As described in my original post, this is a 2d turn based open source Unity game. You can see full details in the original post.

I added many things in this release.

I added a scoreboard to the end of the game to show the winners and losers, and to see who died last. 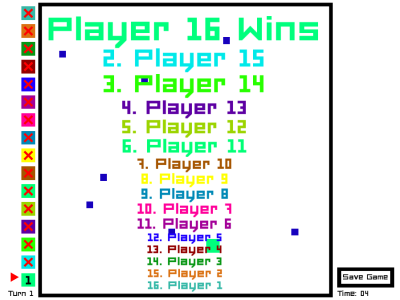 I also added color fading, so when the current player switches, it won't immediatly change the color, but slowly fade to not hurt your eyes. I also added many animations for things spawning in, to make the whole game look smoother overall.

But, the most important thing I added was game saving, you can now save your game and load it for later.

I also added many playabilty fixes like making the pickups spawn throughout the gameplay so you never run out.

I plan to add LAN multiplayer, and revamp the overall look.