This is a turn based strategy game where you must try to kill all the other player's units to win. There can be up to 16 players. You can see more in the original post

In this release I added the ability to play a networked game. Now you can have other players join your game and can play together, from different computers. 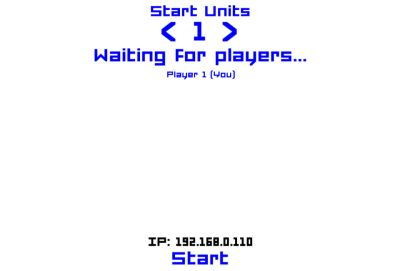 You can join by specifying their ip address.

The game communicates over TCP and sends messages for what button was pressed, or what person became selected. The networking is done manually by sending strings of text signifying a command, and since TCP sometimes groups commands, the game will make sure to separate commands before executing them.

Since this is a turn based game, I do not have to deal with latency, meaning it just requires sending the data.

I have already implemented saving and loading games, but I have not implemented that into multiplayer yet (since that would require sending a lot of data over the network. My next plan is to work on loading your game into a multiplayer game.

Giving the game host the ability to kick players is also a feature I am planning on adding.