This is a reader for the scouting app developed for FIRST Robotics Team 2708. It is used to scout other robots at the competition. The data is sent from 6 client apps to the server over bluetooth throughout the course of the events. The server must manage and put everything together. Scouting is necessary to be able to change your team's strategy and know what teams to pick to join your alliance. This reader converts the complicated database information into something easily understandable. I added a calculated robot death rate (when the robot gets disconnect or shutdown due to some issue).

The climb rate is has to take into account the column next to it as well, since it could be a successful climb or a failed climb.

Starting position, starting platform and the starting object were also added in another section. This information isn't 100% needed, so it is hidden by default, but can be seen by clicking on it.

Before, sometimes very simple operations (reading and modifying an array), were taking a very long time. I realized this was because I was running everything on the main thread.

To send data from the client:

To receive the response:

The server-side code can then callback with:

Added fractions alongside the percentages

Now, whenever there is a percentage, it also shows the fraction that made it (because sometimes those can be more understandable). For example, when showing success rate, it will show 80% along with 8/10 (10 total matches). 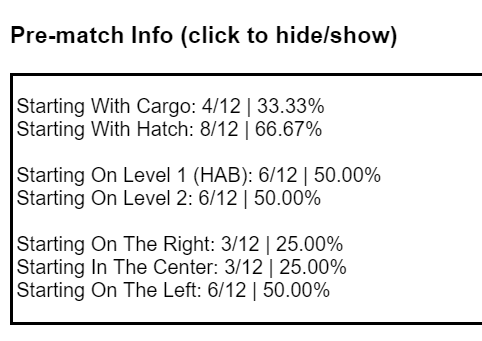 Made pressing enter on the textbox load data

Before you needed to hit load data, this makes it a lot easier to get data quickly

Now, when the program is started, the text box is already focused ready for you to type into it.

Made all the decimal place numbers look nicer

They now use .toFixed(2) to keep less decimal places and not look unnecessarily long.

Made the image size more dynamic

Now it changes based on window size

The comments in the scouting data are now displayed, along with the match they are from and who made the comment.

The comments in the database always had some placeholder characters such as |c and |q referring to , and ". These are finally viewable in the way they should be, as the program now converts them to their proper symbol.

This was put in place to prevent issues when data is transferred in the companion scouting app.

Instead of just showing the maximum successful object placements, and the maximum amount of failures, it tries to show the maximum performance of the robot.

It looks for the most successes it's every done. If there is more than one match that has the maximum successes, it will look for the minimum failures in those matches. In this way, it finds the best performing matches.

Before, the match data was just in the order the data was received, not in the chronological order. This is important when displaying comments.