Now the bluetooth threads nicely close when the app is closed. Before, they only shut down when the app was removed from the multitasking menu.

The schedule viewer on the main page added in the last update can now scroll. This makes it possible to see more info on the schedule than before.

Before, there was no general statistic about what happened to each game object (cargo and hatch) in total, only in each location. The app now exports a general statistic, which is more useful for quick analysis

Allowed some ratings to not be done

Some robots never use parts of their robot, but before the users were required to rate these places, now there is a did not intake button, and this button let's the rating not be filled (and greys it out) 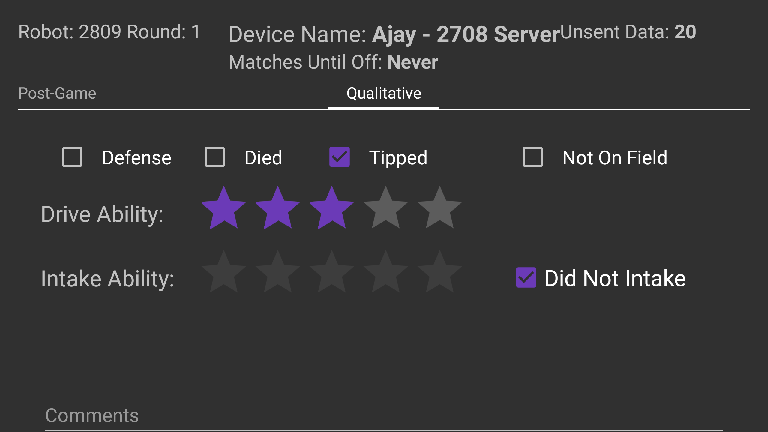 Some users were submitting empty data when a robot no-showed to their match. This is not what we want, we want no data to be submitted for that event. Now, there is a checkbox to specify if they no-showed.

The checkbox doesn't actually do anything, but instead informs the user that they shouldn't be submitting the data. I think this is a very cool way to implement instructions without writing paragraphs onto the app's pages.

The schedule viewer now allows you to view it in the main app, instead of just at the beginning. This is a feature that was requested a lot.

Option panel on the alert 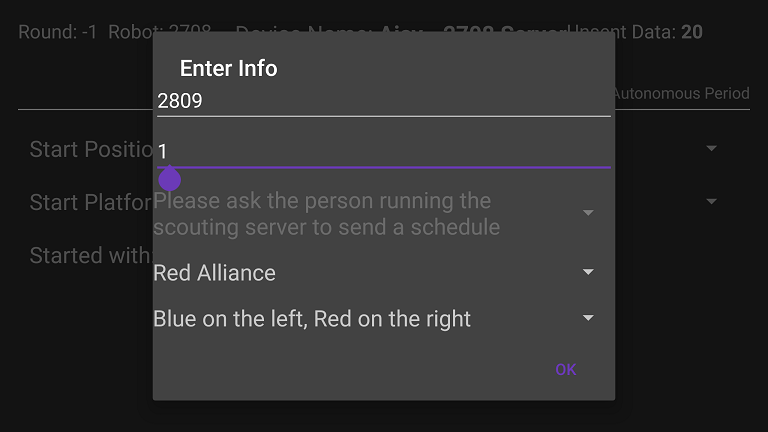 This alert to select a robot is presented at the beginning before scouting. Due to it being an AlertDialog in Android, it was very hard to do anything while in this view, but now I added an options menu that can be displayed in this alert. This allows the user to return back to the menu without restarting the app and view the schedule straight from there.

Now that there is automated schedule, this is not needed. Originally, the match number was capped at 100, to prevent people from accidentally typing in robot numbers in this field (and robot numbers are typically 4 digits). This was a good workaround for the time, but now the robot numbers are automatically assigned, making it a lot easier.

When creating a schedule for when users have shifts on and off scouting (watching and recording data on the robots in the competition), the app used to just put the person off that has been on for the longest. However, there are usually multiple people who have been on for the same amount of time, making some people always just end up at the bottom since they are sorted by alphabetical order (If people have the same time on, they aren't reshuffled around).

Now, the app takes into account the amount of times each user has taken an extra shift (not switched off when some other people have). This number is used as a second sorting number, to sort the users with the same time on.

This causes the extra shifts to be distributed evenly among all people.